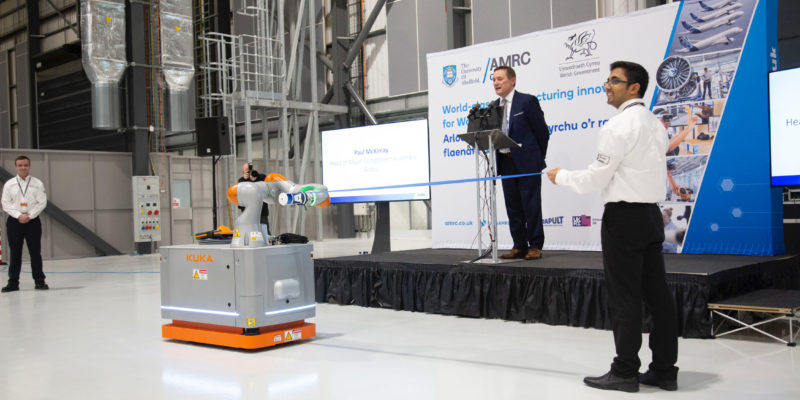 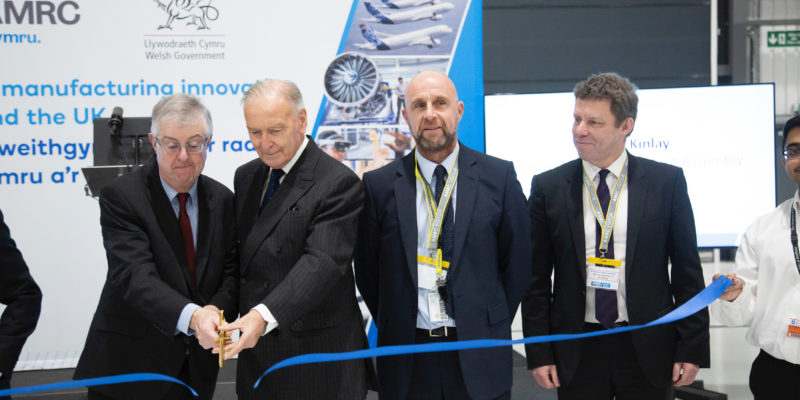 Before Christmas, the University of Sheffield officially opened its Advanced Manufacturing Research Centre (AMRC) Cymru, a £20m state-of-the-art research and development facility in North Wales. As a member of the AMRC, SCHUNK UK played an integral role in the opening ceremony, holding the ribbon with a SCHUNK gripper for Wales’ First Minister Mark Drakeford to cut the ceremonial ribbon.
Described by Welsh government ministers as a ‘game changer’ for the economies of Wales and the northern powerhouse, the AMRC Cymru is a purpose-built research and development facility close to the Airbus wing-manufacturing plant in Broughton.
It was officially opened by First Minister of Wales Mark Drakeford and Economy and North Wales Minister Ken Skates, who accompanied Professor Koen Lamberts, President and Vice-Chancellor at the University of Sheffield, on a tour of the new building to see the new technologies that will be available to manufacturing companies across Wales.
Situated in the Deeside Enterprise Zone, the facility will operate a 2,000sq/m open access research area focus with a focus on advanced manufacturing sectors such as the aerospace, automotive, nuclear and food. This region has a strong manufacturing base and AMRC Cymru will build on this, driving world-class research and expertise across the supply chain. It is predicted the new facility could increase Gross Value Added (GVA) to the Welsh economy by as much as £4 billion over the next 20 years.
Holding the ceremonial ribbon for the First Minister was a SCHUNK Co-act gripper attached to a Kuka Cobot that was mounted on a Kuka AGV. The new SCHUNK EGH Co-act gripper is the latest addition to the SCHUNK Co-act gripper family and is a flexible system for gripping and moving of small to medium-sized workpieces in the areas of handling, assembly and electronics.
The long stroke of the SCHUNK EGH Co-act gripper can cover a very wide range of workpieces as the gripper fingers are particularly suited for positioning over the entire stroke. The robust parallel movement of the fingers ensures constant gripping force at a position over the entire stroke. Quick and easy to assemble, there is no height compensation required for the robot. The design of the SCHUNK EGH Co-act gripper enables the gripper to be attached to the robot quickly and easily as the included adapter plate is attached to the robot flange using the supplied fastening material. Subsequently, due to the assembly quick-release fastener, the gripper can rapidly be attached to the adapter plate with the enclosed hexagon socket wrench.
The final step is to establish the electric connection; a starter kit is available for quick and easy installation of the SCHUNK EGH Co-act gripper. This contains all the necessary components to successfully mount the gripper onto the robot and to put it into operation. In essence, the new system offers long and freely programmable stroke for flexible workpiece handling with a gripping movement that incorporates parallel kinematics for constant gripping force over the entire stroke length.
With fast commissioning, programming and simple use of an intelligent servo gripper due to the ‘Plug & Work’ starter package, the SCHUNK EGH Co-act gripper offers optionally attachable flexible fingers for increased flexibility. This also increases the gripper’s range of application.