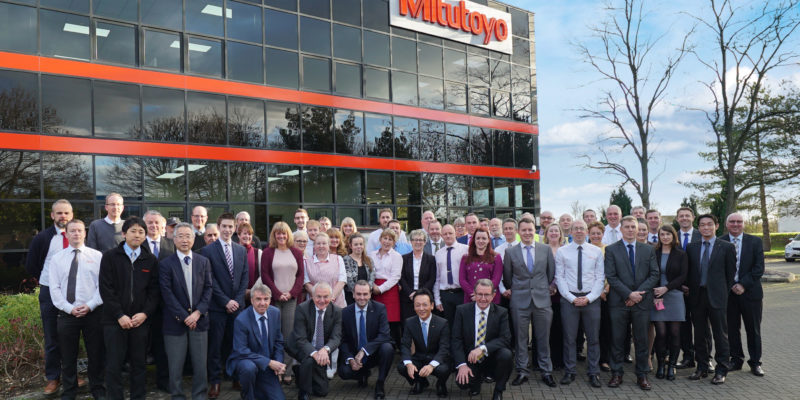 In 1980 the UK subsidiary of the Mitutoyo Group was founded in Andover, Hampshire, with the ambition of building a business on the importation of high quality metrology products from the Japanese parent company. The beginnings were small but enthusiastic, and eventually resulted in the company assuming a leading position as a supplier of measuring equipment to British industry.

From those modest beginnings, the company grew to become the powerful force in the metrological equipment supply field in the UK that it is today, mirroring the industry leading position of the Mitutoyo Group in the world market.

Under the leadership of the founding directors David Thomson and Masanori Nonaka from the group’s HQ in Tokyo, and ably assisted by Martin Weeks, the company made an immediate impression by initially concentrating on offering high-quality basic hand tools such as micrometers and calipers but also venturing into the burgeoning Coordinate Measuring Machine (CMM) marketplace.

In due course, strategically placed sites with product showrooms at Warwick, Halifax and East Kilbride were established to offer convenient local service to the majority of the UK. Administration, training, service and repair functions remained at Andover HQ while a NAMAS (now UKAS) certified calibration laboratory was set up at Warwick, which also housed the MGT division to offer bespoke metrology solutions to industry. Halifax became the hub for contract measurement services based on the strong demand for turbine blade measurement from the aerospace sector. A major change in recent years was the relocation of the Warwick operation to Coventry.

Training and education are matters of particular interest to Mitutoyo, and presently there is an extensive range of courses on offer from the company with many designed to cover the basic principles of dimensional metrology offering industry recognised accreditation (from City & Guilds). Additional courses aim at providing users with the specialised knowledge needed to realise the maximum potential of the more capital-intensive items from Mitutoyo’s extensive range of sophisticated measuring equipment.

Mitutoyo UK also created and developed a free-of-charge education pack including booklets, quick guides and wallcharts (available directly online). This pack serves as a convenient reference to the theory and practice of engineering metrology for use in the classroom, workplace and laboratory. Additionally, a comprehensive handbook that covers a wide range of metrology topics in considerable depth has been produced in collaboration with Mitutoyo America which contains material unavailable elsewhere in such a compact and cost-effective form.

Mitutoyo Corporation is a Global industry sponsor to WorldSkills International, often called the Skill Olympics, with Mitutoyo UK playing a key role in terms of providing high-quality metrological capability for the Manufacturing and Engineering Technology part of the competition. This involves sending a large quantity of basic measuring tools together with several CMMs and the associated specialists needed to operate them to the venue, which has ranged from cities as widely separated as São Paulo and Abu Dhabi. Although a substantial commitment in terms of time, money and resource, the company feels the benefits are well worthwhile to society as a whole, and fully in line with the philosophy of the company founder, Yehan Numata.

The management structure has remained stable, and successful, over these last four decades. Only in the last few years has a younger generation started to share the responsibility. Today, David Thomson has retired and is succeeded by Ray Penny (current Managing Director) who brings a wealth of sales experience to the role from his previous position in the company. The long-time technical manager of CMM operations, Steve Dyke, has also assumed the additional responsibilities of Director to strengthen the team.

Management sees the future as exciting, with the launch of new products including the MiSTAR Shop-floor CMM, the advanced Formtracer Avant and new CRYSTA‑Apex V Series of CNC Coordinate Measuring Machine designed for the Smart Factory, where automatic equipment status monitoring and data transfer are essential.

As always, the company intends to maintain its reputation of providing UK industry with the best products, the best service and the widest range of measurement solutions available from any vendor in the United Kingdom or overseas.