And the winners are….

And the winners are…. 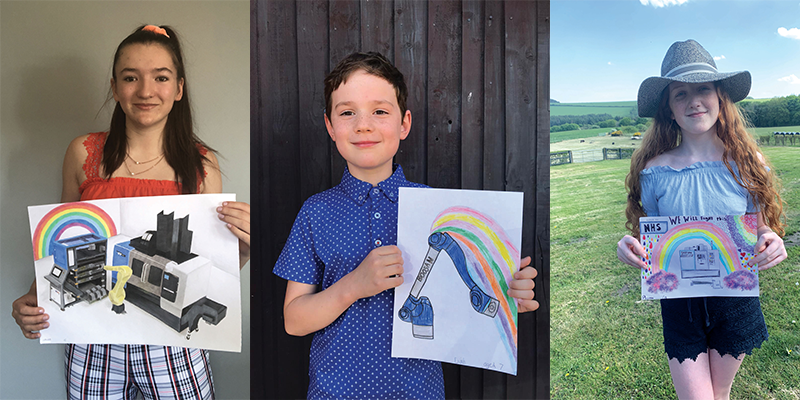 Mills CNC’s Young Artist of the Year competition proves popular with young people and, after much deliberation, the three winning entries are selected.

Mills CNC, the exclusive distributor of Doosan machine tools in the UK and Ireland, has announced that its recently held ‘Young Artist of the Year’ competition was a resounding success with over 40 young people submitting artwork prior to the 15th May deadline.

Created in response to the coronavirus outbreak and the Government’s ‘Stay at Home’ and social distancing instructions, the competition was organised into three separate age-related categories: (seven years of age and under, eight to 13 years, and 14 to 18 years).

The subject matter selected for the competition was specific to the machine tool and manufacturing sectors, and Mills CNC’s pivotal position in both. The five subjects selected selected were of new machine tools and automation solutions that were due to be showcased by Mills on its stand at MACH 2020.

“Following the closure of schools and colleges and the imposition of the lockdown many young people clearly found were at a loose end and found themselves with more time on their hands than they ever thought possible.

“In response to these new sanctions, we created our ‘Art Competition’.

“When you run a competition like this you are never sure how many entrants or submissions you’re going to get. But, from day one, it was clear that the competition had gained traction and by the end we had received over 50 submissions from 42 young people.”

The competition ended on 15th May and there then followed an intense judging period involving Mills CNC’s Board of Directors.

“It was hard and we had to make some tough calls. All of the submissions were fantastic and the imagination, energy and creativity of the young people who entered really bowled us over.”

So much so in fact that the company, in addition to awarding £200.00 each to the three age-related category winners, also made the other 39 entrants ‘de facto runners-up’ – with each one receiving an eGift Voucher.

“It was the least we could do.”

The winning artwork as well as all runners-up drawings and paintings will be showcased on Mills CNC’s website (www.millscnc.co.uk). It is hoped that this will be up and running in the first week of June.