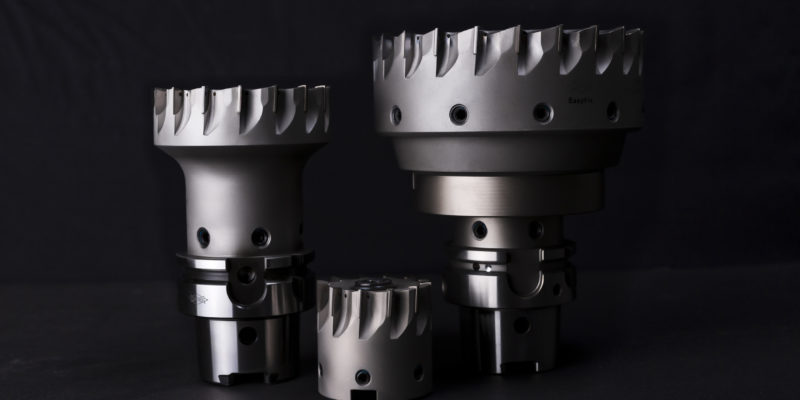 MAPAL customers rely on the FaceMill-Diamond PCD face milling cutter for face milling work at high volumes, on unstable parts and in the HPC (high performance cutting) sector. With its solid steel tool body and the permanently brazed PCD cutting edges, it achieves top feed rates and material removal rates that are second to none. Following comprehensive further development, MAPAL has increased the productivity of the PCD face milling system once again.

“Particularly in the area of high performance cutting, the number one customer requirement is the achievable material removal rate alongside the best possible component surface,” reports Andreas Wittenauer, Head of Application Technology in the PCD Tool division. He goes into more specific detail by adding: “For this reason, the FaceMill-Diamond features an exceptionally high number of permanently brazed cutting edges for its diameter. The cutting edges are designed for a cutting depth of up to 10 mm. Furthermore, the robust tool body absorbs the vibrations generated during machining and prevents damage to the component surface.” Additionally, the FaceMill-Diamond can be inserted directly into the machine when newly equipped – without time-consuming adjustment work requiring operator expertise.

Based on this, MAPAL further developed the PCD face milling cutter in two ways in 2019, increasing its potential for further productivity.

“High cutting values and the resulting chip volume may, under certain circumstances, lead to washout of the tool body. To counteract this effect and maintain an economical product life cycle, we have optimised the cooling concept and positioned the coolant outlets directly at the cutting edges,” explains Andreas Wittenauer. “This ensures improved chip removal and protects the tool body, especially for applications with minimum quantity lubrication or air cooling.”

A direct compare with the new generation of the FaceMill-Diamond and the previous model provides the specific improvements. A customer machines a part made of AlSi1 with cooling lubricant on a machining centre. The application parameters of the 63 mm diameter milling cutter have deliberately been left the same for the comparison: a cutting speed of almost 3,000 m/min and a spindle speed of 15,000 rpm. Due to the high-gloss surface requirement, the feed per tooth is 0.04 mm and the cutting depth is 0.8-1.2 mm. “The customer was delighted with the new tool right away,” says Andreas Wittenauer. “The surface it achieves is noticeably higher in quality and it removes the chips more effectively. We are pleased that we were able to increase the tool life by 15 percent with the new FaceMill-Diamond, and that the customer is now successively converting their entire inventory.”

Customers with a diverse range of machinery want a certain degree of flexibility as far as tool use is concerned. In order to meet this demand, the FaceMill-Diamond is now also available in a modular version with a milling head. Andreas Wittenauer provides us with more details: “The modular version of the FaceMill-Diamond can be used flexibly – particularly for small series production and machinery that uses different interfaces, or even for large series where production is initiated on one machine and then continued on another.”

In the context of a customer project, the modular version offered improvements for both the surface and the cycle time compared to the competing tool used previously. With a spindle speed of 12,000 rpm and a feed per tooth of 0.1 mm, the machining tool variant of the FaceMill-Diamond mills about three seconds faster than the previously used tool. As such, the quadruple mounting on the machine results in a saving of twelve seconds in the cycle time.

The FaceMill-Diamond is used not only in the standard variants available, but also as an individual specialised solution, as demonstrated in the machining of a wheel carrier made of AlSi12(T4) on a machining centre. The employees responsible for the process complained about the use of a face milling cutter in the original process. With the competing tool that was used originally, the high cutting values required for cycle time reasons combined with the stock removal led to process-critical burr formation. Specifically, the chip was bent at 90° on perimeter of the part and was not cut, being instead retained as a so-called burr flag on the edge of the part. Several challenges became apparent in our first conversation with the customer. Andreas Wittenauer: “The heat-treated part has a strong tendency to vibrate and the hard chips wash-out the tool body. On top of that, several milling operations are required at different positions on the part – the stock removal is up to 7 mm axially and up to 3 mm radially.”

The specialists at the Centre of Competence for PCD tools settled on a combined special cutting edge geometry in order to meet all the requirements provided. At the unchanged cutting values of a feed rate of 15,400 mm/min and a spindle speed of 7,000 rpm, the tool life was increased exponentially: the FaceMill-Diamond now reliably mills 40,000 wheel carriers, contrasting with the previous output of 3,000. Today, our customer has 16 FaceMill-Diamonds in circulation in order to machine their annual production quantity of 600,000 parts.

The FaceMill-Diamond is a high-performance product for face milling that can be used even more economically and flexibly thanks to the further development. These additionally developed variants can be ordered with short delivery times.