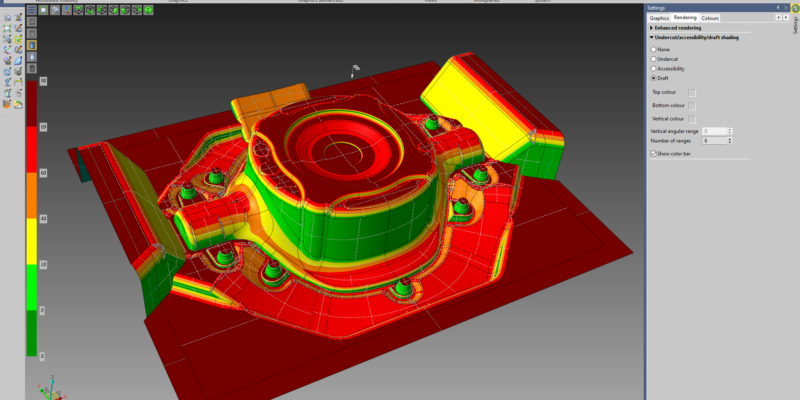 A raft of new and enhanced functionality features in VISI 2021 – the latest release of Hexagon’s specialist mould and die CAD/CAM software.

CAD analysis benefits from a new function which improves the suite of analysis shading modes. Draft Analysis has been added to the existing Undercut and Accessibility shading, performing an on-the-fly analysis of the draft angle. This uses the same technique as in the undercut mode, but extended to more ranges. The colours and angular value of each range can be changed by simply clicking on the colours or numeric labels on the graphics toolbar.

Repair functions used in the Repair Invalid Faces of Bodies command are now integrated in the Validate command. It is now also possible to zoom in on any potential issues using the Auto Zoom function.

Developments to the CAD Reverse module enhance the Reverse and Casting processes. VISI Product Owner Marco Cattaneo explains that the scanning operation has been improved with the shaded view, giving better and faster feedback. . “Also, new Part Unfolding features have been added to encapsulate the unfolding process of linear and non-linear bends; the system is able to integrate adjustments made to the original part, rebuilding the changes to all unfolded stages in one-click. And Reverse projects now benefit from faster and more precise surface creation.”

With Point Scanning, the shaded point cloud is now shown during the scanning operation, giving the operator an immediate view of what has been correctly scanned, and if anything is missing.

An additional option has been added to automatically create a mesh as a scanning result, which he says is particularly valuable when a quicker, rather than detailed, result is needed.

Enhancements to probing during the Reverse process now detect the correct diameter of the part in relation to the position of the probed points. A Circle/Slot probing feature has been added for probing and designing a circle or slot, giving several options to guarantee the probed element is the correct size and in the correct position.

“The new Curve probing feature allows the user to probe a curve alongside the part. This can save time where curves are used to identify the shape – they can be used to create the relative surfaces, avoiding the need to create a mesh first.”

All features relative to surface creation when working on planes, radii and cones from the mesh, have been reviewed, leading to time savings, and better quality surfaces during model preparation. “There’s now the ability to define the reference direction or surface of some constraints. While creating the surface, users can select a direction, and then add the constraint type – parallel, perpendicular or concentric.”

A Mesh to Advanced Surface feature has been added for creating a good quality surface, representing an alternative to the standard Mesh to Surface command.

With Body to Mould, there is a new option to select multiple elements, including solids and surfaces, and move the selected bodies to the mould position. During the part positioning, ‘non-uniform scaling values’ can now be defined by the user, and the system automatically sets the relative shrinkage data in a special Assembly Manager field (Bill of Materials).

With Mould to Body, the system allows multiple element to be selected, including solids and surfaces, and to move the complete mould back into Body position. “This will be valuable for operators using CMM to check tools in the body position. When they select the part to move back, they get an option to select multiple elements to go with the tool back to Body position,” says Marco Cattaneo.

When browsing mould parts, the system lists those which have been defined as ‘body to mould,’ showing all relevant data. And defined ‘shrinkage’ data can be edited in the ‘reset scale on parts’ function.

To provide a powerful and complete solution to this new unfolding approach, additional features have been included for flanges and non-linear bends.  “The aim is to study and modify a part, preserving the links between the different unfolding steps.”

A new feature manages flange unfolding on the analysed part, and shows the result in preview mode, so the operator can evaluate the result and set different parameters, while preserving the link with the original part. This automatically recalculates the flanged part, meaning all linked parts can then be rebuilt in reference to a modification on the original.

An interface with Hexagon’s G-code simulator, NCSIMUL Advanced comes as a cost option in VISI 2021. Marco Cattaneo explains that NCSIMUL manages the complete machining process from the NC program to the machined part. “Its capabilities include automatic G-code reprogramming, G-code simulation and cutting tool management.”

He says the most significant points are:

An enhanced waveform algorithm prevents tool damage around pegs (or thin walls) left during the milling process. Those areas are now identified, and the XY step reduced, smoothing the corners. This reduces tool stress, making damage or breakage much less likely.