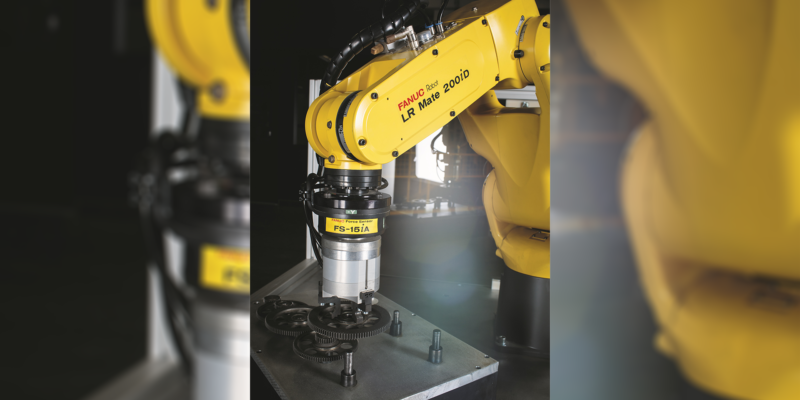 FANUC has expanded its LR Mate series of multi-purpose industrial robots with the introduction of the strong yet compact LR Mate 200iD/14L.

Building on the success of the 6-axis LR Mate series, the 200iD/14L benefits from an exceptional weight-to-payload ratio, weighing just 27kg, but able to handle workpieces up to 14kg. By doubling the maximum load capacity in comparison to its predecessors, the LR Mate 200iD/14L is able to support a range of high-productivity applications.

Crucially, its slim and compact design means the improved capacity of the LR Mate 200iD/14L is achieved without impinging on factory floorspace. In an industry where space is often limited, a footprint of 190mm2 is a vital asset for manufacturer productivity.

Andy Armstrong, Sales and Marketing Manager at FANUC UK, comments: “We’re thrilled to be expanding our LR Mate series with the 200iD/14L. Doubling the payload capacity will provide our customers with far greater flexibility, especially when you consider the streamlined package it comes in.

“It is ideal for compact machine tending cells and high productivity assembly lines, or loading and unloading applications. Its design means it is a versatile option for manufacturers looking to introduce automation into applications that previously suffered for special constraints.”

The LR Mate 200iD/14L avoids a number of common issues associated with introducing automation into manufacturing facilities, such as snagging or the interference of gripper supply equipment, by integrating services into the arm itself. This further reduces the overall footprint, and helps to prevent accidental damage to both the robot and surrounding equipment.

It is also IP67 protected as standard, which enables the 200iD/14L to operate in areas of high humidity, and saves on the cost of additional expensive protection equipment.

Andy concludes: “The LR Mate 200iD/14L is a great addition to the LR Mate series, and is indicative of our wider dedication to offering an automation solution for all levels, from entry-level through to wide-scale automation of factory processes.

“The range of options available in the LR Mate series alone enables manufacturers to find a robot ideally suited to their unique requirements, and highlights the increasing versatility of automation solutions.”