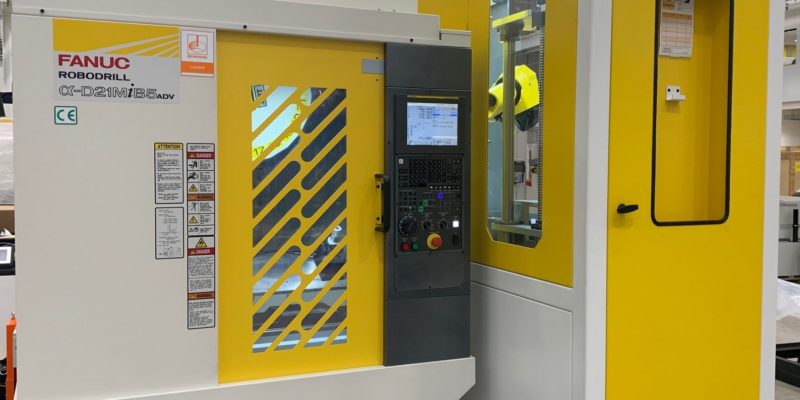 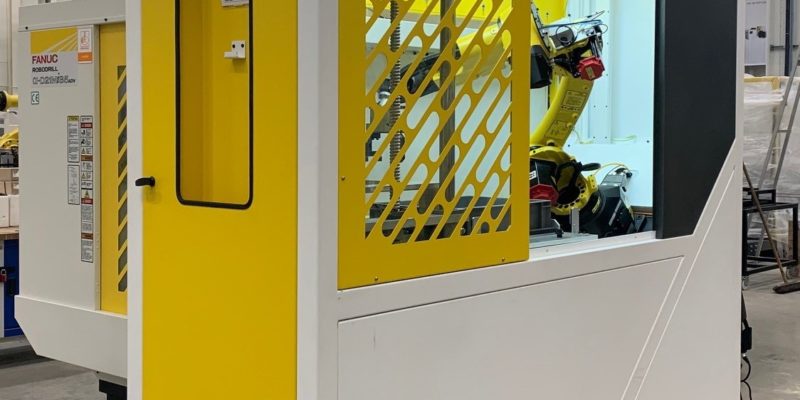 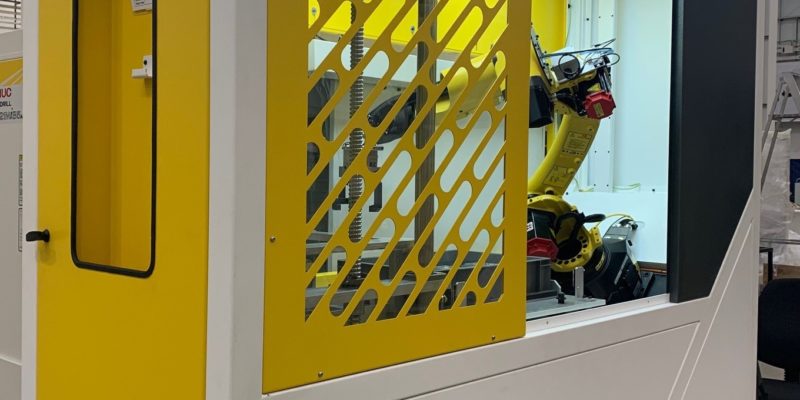 FANUC has collaborated with Birmingham-based RoboPod™ to launch the iTend, a turnkey machine-tending cell for its ROBODRILL vertical machining centres

The iTend is a low-footprint, cost-effective automation solution aimed specifically at subcontract manufacturers. At just 850mm x 2500mm, it comprises of a FANUC M-10iD robot which uses bespoke tooling to automatically take workpieces from a magazine stacking unit and load the machining centre, before restoring the completed parts from the magazine tray once machined.

The iTend’s magazine stacking unit can store up to nine 600mm x 400mm trays, depending on workpiece height. Trays are available in three different heights: 75mm, 120mm and 150mm, with the iTend magazine able to accommodate, nine, six and four trays respectively. Both the robot and magazine unit are powered by FANUC servo motors for fast, repeatable performance.

What helps contribute towards the iTend’s class leading footprint is the fact that the robot is completely contained within the cell’s casing. As such, any peripheral guarding or fencing is not required. It also takes up much less floorspace than comparable systems which employ laser scanners to detect operator presence, and avoids any slow-down in operation which can occur once a laser detection system has been triggered.

As such, the iTend can significantly improve productivity through unmanned running times, which can be extended up to 36 hours depending on the volume of products and the complexity of the machine program.

Additional innovations include the use of a FANUC’s iRVision 2D vision sensor mounted above the parts. This is used to quickly identify and confirm the correct workpiece prior to processing, with the robot then loading the machine tool. Once complete, the robot unloads the part and restores it to the tray or outfeed chute. It is then loaded back into the magazine stacker, and the integrated drive mechanism indexes the stack to the next height to allow the following cycle to start.

Richard Evans, CEO of RoboPod comments “Utilising the FANUC intelligent product toolbox to design and build a solution that the company itself can market to its wide customer audience has been a really good exercise for us. We have only recently started using FANUC products, but have already seen the major benefits they bring over other suppliers. Development of solutions that fulfil the ever-increasing demands of UK manufacturers is made much easier when we are able to pull on the built-in cost-effective integrated intelligence that FANUC offers.”

Andy Armstrong, Sales & Marketing Manager at FANUC UK, adds: “The reduced footprint over existing cells on the market was a major driver in developing the iTend. The ability to place our ROBODRILL machines very close to each other in a facility has always been a competitive advantage as they have no maintenance requirements from the side of the machine and therefore take up less space than comparable models. The same philosophy has been applied to the iTend. At only 850mm wide it has a very low footprint, and has the ability to load one or two machines if needed to allow even further value to be taken from a single robot.”

He concludes: “Using one of our approved system partners to design and develop the iTend machine loading solution has had many benefits. It has led to us to being able to offer a cost-effective automation solution for our ROBODRILL machine, and has allowed us to develop and build our relationship with one of the UK’s most successful robotic integrators.”

To find out more about FANUC’s range of robots and automation solutions, please visit: https://www.fanuc.eu/uk/en