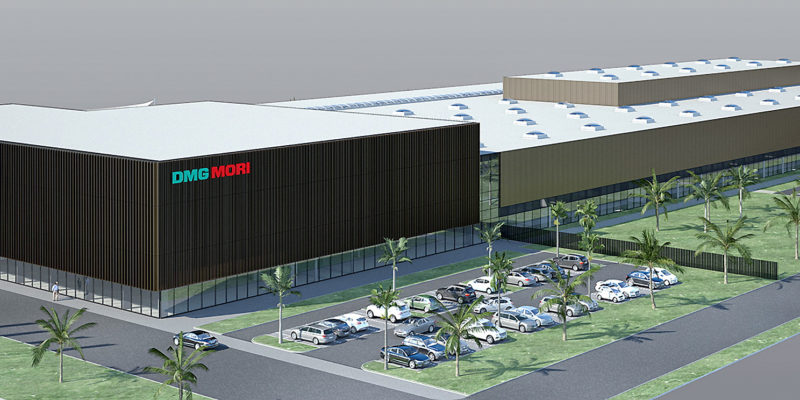 “Egypt is the door to Africa – a continent full of potential and high demand for future technologies. With our Smart Factory, we are accelerating the industrialization of this country, create new future- proof jobs and offer attractive educational opportunities,” says Christian Thönes, Chairman of the Executive Board of DMG MORI AKTIENGESELLSCHAFT.

Made in Africa for Africa by Egypt: Together with its long-standing partner Arab Organization for Industrialization (AOI), DMG MORI is investing in an approximately 20,000 m2, highly automated and fully digitized production plant for turning and milling machines. The cutting-edge production shows the full potential of holistic technology solutions: flexible automation, end-to-end digitization, state-of-the-art flow assembly with AGV transport systems (“Automated Guided Vehicles”). Production is aligned to an annual capacity of over 1,000 machines. The DMG MORI GEMAS (German Egyptian Manufacturing Solutions) joint venture will be built on a total area of around 60,000 m2 – near Cairo Airport. The Grand Opening is planned for autumn 2023.

High-precision machine tools from DMG MORI are a guarantee for progress and are at the beginning of global value chains. A strong manufacturing industry is key to a competitive economy, the enabler of numerous technologies and the basis for over 40 industries such as Aerospace, Railway, Energy as well as Automotive, Die & Mold. Future technologies can only be utilized optimally with well-qualified employees. DMG MORI offers particularly young people good prospects with targeted training and further education programs for industrial manufacturing. For this reason, DMG MORI Academy GmbH will offer state-of-the-art CNC training in the new production plant. DMG MORI is also planning a major training offensive at Egyptian schools and universities to prepare the predominantly young, motivated population – 60% of Egyptians are under the age of 30 – for a modern working world.