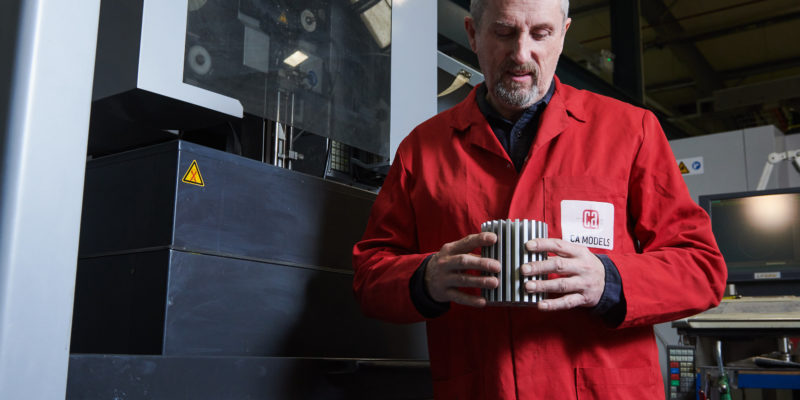 CA Models, a market-leading prototyping shop with close to 40 years of sector experience, says that Sodick wire-erosion technology supplied by UK subsidiary Sodi-Tech EDM, is now such an integral part of business that life without it is unimaginable. The company has two Sodick wire EDM machines on site at its Stirling facility, the latest being a Sodick AQ537L, which can accommodate workpieces measuring up to 770 x 520 x 340 mm.

Owner and Managing Director Clark Campbell formed CA Models in 1983. Back then, Mr Campbell finished his first prototype order in the spare room of his flat – a hand-made, bright yellow, underwater camera – a presentation model for a reputable product designer. The camera was well received and created an extraordinary moment for the young entrepreneur – the realisation that he wanted to compete with the best model makers in the UK.

Fast-forward to the present day and Mr Campbell has 36 employees under his wing, all of whom help to focus on the core business streams of additive manufacturing, precision CNC machining and specialist model making. A unique blend of cutting-edge CNC machine-tool technologies is combined with model-making craftsmanship to provide customers in sectors such as aerospace, motorsport, medical device, and oil and gas, with quality products and a responsive service.

Among the machine-shop technologies providing the heartbeat of operations at CA Models is wire EDM.

“Our Sodick AQ537L provides outstanding accuracy and capability, making it popular for cutting punches and dies as part of the tool-making process,” says Mr Campbell. “However, at CA Models, EDM goes far beyond just tool making, and has become indispensable to our business.”

In the early days, Mr Campbell built models by hand to physical drawings. Then, the advent of CAD took the sector to another level and CA Models started investing in CNC machines, the first being a four-axis mill.

The arrival of CNC machining capability made the company compatible with a number of high-end companies, particularly in the aerospace and Formula One sectors. It was at this point, around 1996, when CA Models invested in its first 3D printer, which was based on the stereolithography (SLA) process. Today the company has 11 SLA machines, as well as an array of SLS [selective laser sintering] 3D printers for nylon prototyping applications, and a number of FDM [fused deposition modelling] machines.

As the prototyping side of the business took off, so did the company’s machine shop, which prompted Mr Campbell to invest in his first Sodick wire EDM, approximately 15 years ago. Jump forward to around 2013, and CA Models acquired its first 3D printer for metal applications, which is described as a “momentous turning point” for the business.

“Today we are inundated with enquiries from customers who want prototypes printed in metal,” he says. “We have two metal 3D printers, one making aluminium parts, and another producing stainless steel 316 components. In addition, we’ve just spent €1.8 million on a 3D printer that can produce parts in titanium, supported by a large 5-axis universal machining centre.”

These machines blend in well with the company’s Sodick wire EDMs, as Mr Campbell explains: “We use the Sodick AQ537L for a multitude of purposes. For instance, although we receive a lot of orders for prototypes that only require wire erosion, we are finding the EDM is extremely useful for supporting our metal 3D-printing technology. Anyone who is familiar with metal 3D printing will know that it’s only accurate to a certain degree, so if we’re working on an aerospace or defence project, for example, the customer will often want 4µm accuracy. In this instance, we’ll take the metal 3D-printed part and, depending on geometry, either wire erode it, or five-axis machine it to within tolerance. CA Models is one of not many using wire erosion to support metal 3D printing in this way.”

A lot of the prototypes produced at CA Models fall inside a 250 mm size envelope, a number of which pass through the Sodick AQ537L. The machine was introduced purely to boost wire-erosion capacity, in support of an older but larger Sodick model.

On a day-to-day basis, the AQ537L is set to work producing a myriad of different high-precision prototypes for sectors such as medical device, military/defence and product design. Most are 1 or 2-off, or maybe 4-off at most, and made from materials that extend from alloys through to hard steels. On other occasions, when the company has a full metal 3D print build in progress, the best way to remove components from the support plate is to use wire erosion.

“The AQ357L makes a beautiful job of this,” says Mr Campbell. “The wire comes along and, once finished, the support plate looks brand new and ready to use again. I know it sounds really simple, but it’s so helpful. Wire erosion has become very important to our business; I can’t see us ever being without it. If there were no wire-erosion machines here we would have to outsource, then we are at someone else’s beck and call, and I don’t like that. I work in the ‘rapid’ business, and subcontracting today has become counter-intuitive to this philosophy.”

To provide an example of how times have changed, Mr Campbell recounts an example from the Formula One industry.

“I can remember when I received my first order from a Formula One team, for an SLA model measuring about 200 mm long,” he says. “I was given one week by my contact to manufacture and deliver the model. Today, the same contact, who now works at a different Formula One team, gives me 48 hours to provide 24 SLA models. That’s the world that we live in, and it’s why we need an in-house resource when it comes to wire erosion. Every time we have a really accurate part or feature to produce, and the clock is ticking, the AQ537L comes to the rescue. Furthermore, we sell on quality, so when we have to hit a tight tolerance, it’s reassuring to know we have the capability in place.”

Now in his early sixties, Mr Campbell has seen many changes over the years, including the introduction and growth of wire erosion.

“I’ve seen enough to write what I think will be a really interesting autobiography,” he says, without really revealing if he is entirely serious. “A friend of mine has already suggested a title: 50 shades of grey primer.” For those maybe unfamiliar, grey primer is a long-standing model-maker’s favourite prior to painting.

The jest is a good reflection of a man who clearly loves his job, and has made a real success of it. Today, Mr Campbell says he doesn’t know of any others who can offer rapid prototyping, CNC machining and metal 3D printing from a single resource. The company even has professional paint and powder-coating shops on site. Perhaps the most complete model maker in the UK? Yes, especially with wire-EDM technology in place.

“Many years ago a product designer said to me that if you stand still you simply get overtaken, and he was so right,” concludes Mr Campbell. “In contrast, if you continue to expand and invest, you’ll see the benefits. It’s something that has stuck with me all these years.”