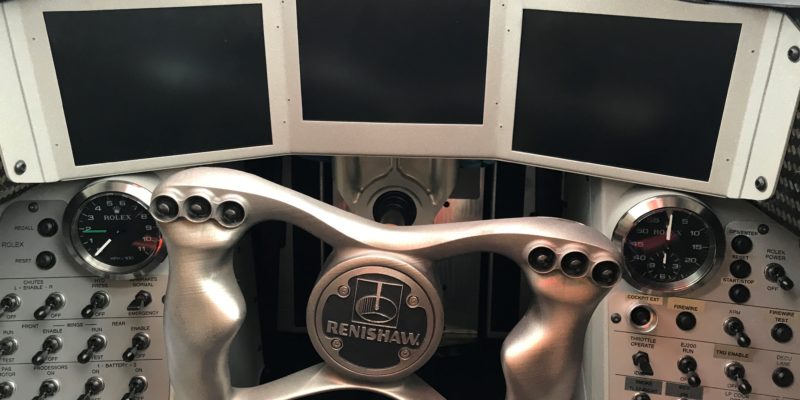 A titanium nose tip and steering wheel additively manufactured by global engineering technologies company Renishaw has been used to optimise the supersonic car that aims to break land speed record in South Africa. Both parts were used in the Bloodhound SSC, now Bloodhound LSR, car that reached its benchmark target of 500 mph in the South African desert in November 2019.

BLOODHOUND is the project behind the technologically advanced supersonic car that was taken out to South Africa, where driver Andy Green managed to log a speed of 628 mph on the 12.4-mile Hakskeen Pan track. Renishaw began working with BLOODHOUND back in 2013 when it became a sponsor, and since then Renishaw has provided its additive manufacturing (AM) expertise to design and manufacture parts for the supersonic car.

Renishaw’s technology was used to build the car’s steering wheel layer by layer from titanium powder. The bespoke design enabled the wheel to specifically fit the hands of Andy Green, to assist him when controlling the car at extreme speeds. Renishaw also used its AM expertise to design and produce the car’s nose tip. Again, this was manufactured from titanium powder to provide a strong, lightweight component, capable of dealing with the extreme loadings that occur when the car is at high speeds.

“Reaching 628 mph in South Africa was an incredible achievement for BLOODHOUND and it was exciting to see Renishaw’s technology being a part of it,” explained Chris Pockett, Head of Communications at Renishaw. “Additive manufacturing gave us the freedom to design the nose cone and steering wheel specifically to undergo the extreme forces involved in the land speed attempt, which would’ve been difficult with traditional manufacturing methods.”

With BLOODHOUND LSR having broken the 500 mph barrier in the South Africa test, BLOODHOUND is now setting its sights on breaking the land speed record in 2020/21. BLOODHOUND previously reached speeds of 200 mph while trialling the supersonic at Cornwall Airport, Newquay in 2017.

To find out more about Renishaw’s additive manufacturing products and services, visit http://www.renishaw.com/additive-manufacturing