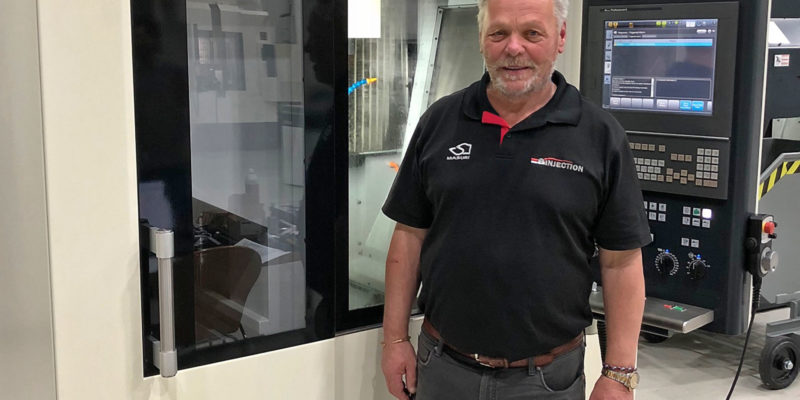 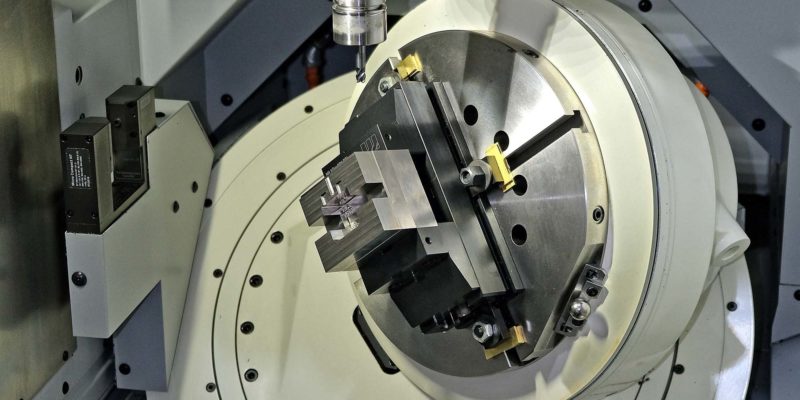 Whitchurch toolmaker and plastic injection moulding specialist BM Injection has over the years replaced more and more time-consuming electric discharge machining (EDM) of moulds and dies with direct milling of the tool steels in their hardened state, which can be up to 58 Rc in the case of 2083 used for injection moulding highly abrasive thermoset plastics.

Until recently, hard milling was the job a 3-axis, vertical-spindle machining centre (VMC), while the only 5-axis model on site was reserved for light mould finishing and for machining complex, mostly graphite electrodes for sparking cavities.

Earlier this year (2019), the company invested in a second 5-axis VMC, a Japanese-built Makino D200Z supplied by UK agent NCMT (www.ncmt.co.uk), for rough and finish milling of tool steels to single-figure micron accuracy. Machining is now carried out in one hit, including complete milling of the gate, whereas at least two operations were previously needed, or else three if a route involving milling plus electrode production and EDM was chosen. Consequently fewer skilled operators are now needed, cutting production costs and alleviating the problem of recruiting experienced staff.

Machining in one clamping by automatically repositioning the workpiece in-cycle using the two rotary axes brings higher accuracy by eliminating tolerance build-up. The Makino has internal sensors and strategic cooling of the spindle, ballscrews and machine structure that allow phenomenally high precision to be held in the Whitchurch factory, even though it is not temperature controlled. Directors Tim Combes and his son Mark pointed to a 54 Rc Stavax test piece machined by Makino under controlled conditions in its test laboratory in Japan to 2 µm total tolerance, commenting that double that is achievable on BM Injection’s shop floor.

“Surface finish is also important. A mould that takes 20 hours to hand polish if it is produced on a sparker can, after direct milling, be finished in three to four hours on the Makino, which is an enormous labour cost saving. Lead-time from order to completion has been cut by an average of 40 per cent.”

Mark advised, “In the case of side-action mould tools, we previously needed to grind them prior to die sinking to achieve the required finish. Now nothing needs grinding and the moulds are finished in one set-up on the D200Z.

“Also, as the machine’s high volumetric accuracy leads to less hand polishing of cavities, it is easier to hold the true shape of the mould and die because less material is being removed. This is especially important when making tools for the production of lenses and other optics.”

Apart from the Makino machine’s ability to hold very high accuracy over its entire 350 x 300 x 250 mm working volume, another reason for its selection was the small footprint of approximately 2.75 x 3.75 metres, which is important as space is limited in the Whitchurch facility. Other features of the machine include a B-axis with 180 degrees of tilt at 100 rpm, a 150 rpm table C-axis, a 30,000 rpm HSK-E50 spindle and cutting feed rate up to 60 m/min.

Despite the increasing prevalence of hard milling, there will always be a place in toolmaking for EDM and both die-sink and wire erosion machines are in use at Whitchurch. To take advantage of the latest technology in this area, BM Injection decided to add a second spark erosion machine, ordering a Makino EDAF3 H.E.A.T. that arrived at the same time as the new 5-axis machining centre.

Tim commented, “It is a stunning die sinker that is compact and 100 per cent reliable, even on demanding jobs, and it is capable of machining to accuracies measured in low single-figure microns. The machine raises the interest of shop floor staff and also impresses our customers when they visit.

“The level of intelligence including built into the machine means that one toolmaker can operate both die-sink machines and also the Makino. Deep ribs can be produced quickly, reliably and with low wear on the graphite electrodes. Constant attendance at the EDAF for manual intervention to avoid the onset of arcing, for example, is not required due to the effective spark gap monitoring and arc prevention circuitry.”

The latest EDAF has a new flushing control and increased feed rates up to 5,000 mm/min in the X- and Y-axes. Another feature, HS-Rib, gives the Z-axis a jump speed of 20 m/min, a 31 per cent increase over the previous model. Ease of operation is provided by a touch-screen, Windows-based CNC, allowing programming of complex parts even when the control is being used by less experienced staff.

Established over 30 years ago, BM Injection (www.bminjection.co.uk) operates from a 10,000 sq ft manufacturing facility on the Ardglen Industrial Estate in Whitchurch. 8  in 10 moulds produced, which weigh up to two tonnes, are used internally for injection moulding of thermoplastic and thermoset products in medium to large volumes in 22 moulding machines rated from 12 to 250 tonnes, some with a pick and place robot. Customers are mainly in the aerospace, automotive, domestic appliance, leisure, sports, safety, optics and transportation sectors.