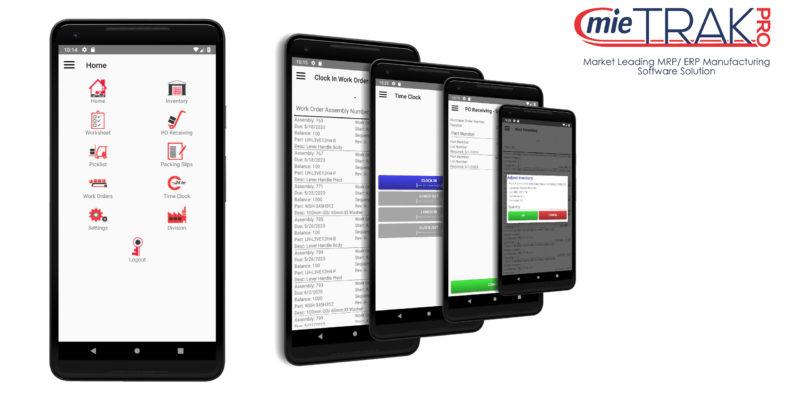 MIE Solutions UK Ltd have unveiled the addition of a new Android application to their ERP software, MIETrak Pro. The enhancement, called MIE Warehouse, is an Android based piece of software which enables users on the shop floor to manage and log their day-to-day tasks such as clocking on and off jobs and tracking inventory.

Prior to this development, MIE Solutions offered two forms of shop floor data capture; barcoding and MIE Kiosk. Barcoding is supplied in the form of stationary barcode scanners whereas MIE Kiosk is a Windows based piece of software. With Android devices becoming more common in the workplace due to their cost-effectiveness and functionality, MIE Solutions identified the platform as an area which they needed to develop.

Technical director, Chris Mann, commented on the new development “Prior to the release of MIE Warehouse, the Android operating system was a platform which we did not cater to in any way. With Android based devices becoming more and more popular, we identified it as an area which would benefit both us and our customers. The application itself is lightweight and feature-rich while being intuitive and easy to use, all at the same time”.

The development of MIE Warehouse was not solely introduced to just tackle the lack of Android functionality offered by MIE Solutions. When compared to the existing shop floor data capture options on offer, the app does offer functionality that was not previously available to the shop floor.

Sam Hawkes, sales director, explains how the enhanced functionality will benefit users of the app “The existing shop floor data capture options were very much focused around production tasks such as job tracking and material consumption. While MIE Warehouse is still able to manage those functions, it has also expanded into other areas. This includes actions such as receiving goods from suppliers, picking pick lists, and dispatching goods to customers. All of these tasks were previously manageable but only by accessing the main ERP system; which for many shop floor users offers far more than they need”.