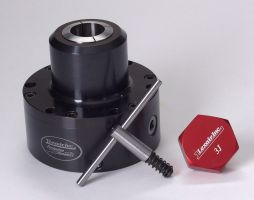 As the name suggests, the Lexair Full Bore chuck range allows the full inner diameter of the lathe or turning centre’s spindle to be used because it does not require a draw tube. The range features a self-contained construction, with mechanical grip and an air release front actuated collet chuck. As such the chuck does not require an external actuator. This makes the chuck failsafe as air is only used to open it, spring force holds the workpiece while it is being machined. Higher spindle speeds are achievable since a collet chuck does not have heavy jaws that lose grip force as the spindle speed of the lathe increases.

Clamping force is adjustable by tightening or loosening the collet using the spanner holes in the front of the collet. For fragile materials or thin walled parts the clamping force can also be reduced by removing pairs of springs inside the chuck.

Leader Chuck’s managing director, Mark Jones, says: “Compared to normal collet chucks the Lexair Full Bore range provides an increased capacity of 25 to 30 per cent. This will provide significant cost savings for engineering companies carrying out bar fed turning operations because it means that they no longer have to over specify their machine tools just to be able to pass the necessary bar stock diameter through the collet chuck.”

Also designed to maximise productivity for bar fed applications is the Prodyne Servo collet chuck range. These chucks have been designed for use in programmable bar feeder applications where accurate positioning of the stock is required. Featuring a patented ‘pull-to-close’ design that maintains the position of the bar stock against the bar feed pusher as the chuck closes, it eliminates the need to have a turret stop for positioning.

Other features of the Prodyne range include concentricity adjustment to further increase accuracy, fixed length collet design, a wedge design that provides high grip force regardless of the spindle speed and a tapered nose for maximum tool clearance.

Mark Jones concludes: “Maximum bar capacities for the four chucks in the range are 42, 50, 57 and 67 mm and the Prodyne Servo collet chucks are compatible with machines using A-5, A-6 or A-8 spindle noses and can be easily mounted using the machine’s existing draw tube and actuator.”