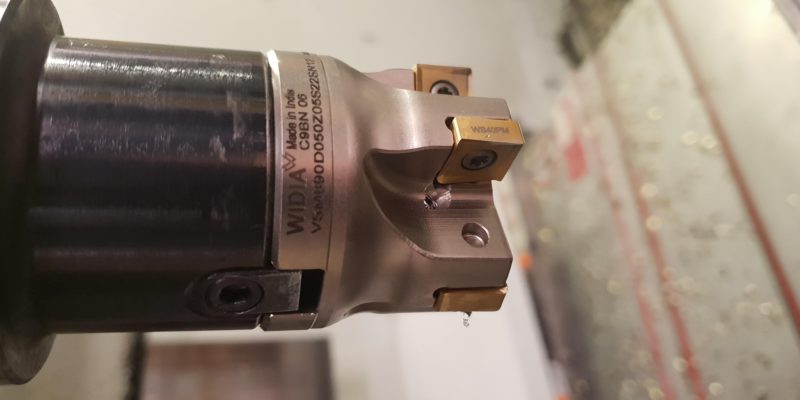 For over 25 years, a niche Merseyside manufacturer has been producing stainless steel service solutions for everything from hotels, restaurants and retail outlets to banks, corporate dining facilities and even offshore vessels.

As a member of the Catering Equipment Suppliers Association (CESA) with ISO: 18001, ISO: 9001 and ISO: 14001 certifications, the prestige of the manufacturer is beyond reproach. As a full-service supplier, the catering manufacturer service includes a complete site survey, CAD & design services, project management, consultation, production and CE marking through to installation and training.

Within its manufacturing and fabrication department, the North West Company is always looking for efficiency and productivity gains. So, when the company won a project to manufacture stainless steel units for cruise ship galleys, it turned to Industrial Tooling Corporation (ITC) and its innovative cutting tool solutions to instigate productivity improvements.

The galley units produced, all required stainless steel fittings that are used to mount doors. All manufactured on-site, the process before the introduction of ITC cutting tools was to face the 316 stainless steel blocks with a face mill and then profile with a 90-degree indexable cutter and then finish with a solid carbide end mill. The proposal by ITC’s Gary Murrey was to apply the Widia VSM890 Shell Mill to face and profile with a single tool to standardise the process to a single tool rather than three. Gary was also confident that the ITC speeds and feeds would be faster than the existing data of 350rpm and 250mm feed and speed for facing and the 1400rpm and 300mm feed for profiling.

Discussing the transition to the VSM890, ITC’s Gary Murrey says: “The first time we ran the VSM890, we knew we wanted to double the feed that was previously running, so we could halve the cycle time. On the profiling operation, this equated to running at near 0.11mm/tooth at 1082rpm with a 600mm feed rate and a 4mm depth of cut and for the facing operation, we ran at 170m/min with a 430mm feed (0.08mm/tooth) with a cutting depth of 0.3mm. Whilst we could have run at faster feed rates and deeper cutting depths, we wanted to retain the best possible tool life to minimise downtime on the machine that would be necessary with insert tip changes.”

The outcome of the trial was that we reduced the milling cycle time from 7mins 30 seconds to 3minutes 18 seconds and we standardised the tooling for this job. In addition to cycle time and tool inventory reductions, we also offered an impressive cost saving, reducing the ‘cost per edge’ from £2.40 to £1.50, says Gary.

The benefits of this initial trial led to a further opportunity whereby a standard 4-flute milling cutter clamped in an ER32 collet, was taking over 20 minutes to machine a 316 stainless profile to a depth of 44mm.

The machine operator had tried on various occasions to speed up the process with the current tool, but this resulted in a detrimental impact on tool life. The experienced machinist was fully aware that higher-quality cutting tools were available, but as is often the case, cost justification can be difficult to impress upon business owners without an ‘iron clad’ case for improvement. ITC’s Gary Murrey spoke to the management and demonstrated the potential benefits via a YouTube video that he had filmed at another machine shop cutting the same material with ITC’s 5021 Series end mills.

Gary’s stock was already held in high regard with this end-user after the ITC engineer had previously slashed cycle times on the previous part by 50% with the Widia VSM890 milling range. This was reinforced by Gary explaining the difference between a standard flute end mill and a high-performance tool, and then discussing the difference between using standard ER32 collet chucks against a BIG KAISER HMC chuck. Explaining how the run-out on the tool would impact machining performance and tool life, it was soon agreed that a trial was the next step. Considering the 44mm depth needed, Gary specified ITC’s 5041 Series with a 48mm reach and 18mm flute length.

Installing a 12mm diameter 5041 Series end mill with a 0.25mm radius and a BIG KAISER HMC chuck with a C20-12 Collet on a Bridgeport VMC 1000 with a BT40 spindle configuration, the results were impressive.

Commenting upon the process, ITC’s Gary Murrey says: “I started using the 5041 Series at 80 to 120m/min and 0.060mm/tooth feed. I then went straight in at the top end on surface speed, which was 3180rpm and 1000mm/min on the specific machine.  With the part being 44mm deep, we programmed an axial cut depth of 11mm that took four passes to achieve full depth. As far as the radial cut was concerned, the starting data was 0.025XD which equated to 0.3mm. Intending to push the cutter harder, I programmed the radial cutting depth at 0.7mm. This yielded a huge improvement on the current data, which was 850rpm, 200mm feed with a 4mm axial cut and 0.3mm radial cut.”

The outcome was that we reduced the milling cycle time from over 20 minutes to just 3 minutes 30 seconds, this is a staggering improvement. The overall cycle time per component has now dropped from 26 minutes to just under 10 minutes. Besides, the cutting action sounded great, the surface finish was ideal for aesthetically pleasing parts that would be polished as a final operation and the tool life was improved in comparison to the previous tool. The customer is extremely pleased with the outcome and we will continue to investigate additional opportunities to reduce cycle times and costs, concludes Gary.