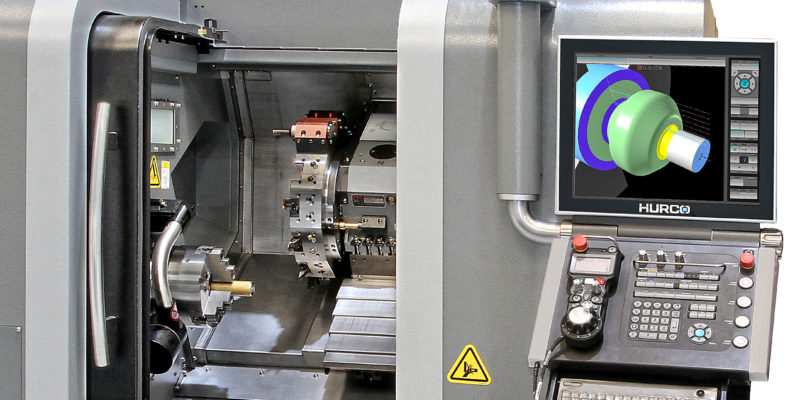 A new range of CNC turning centres with live tooling in the turret has been introduced by Hurco, High Wycombe. The three models, TM8Mi XP, TM10Mi XP and TM12Mi XP, cover the popular 8-, 10- and 12-inch chuck sizes required by most manufacturers. Managing director David Waghorn explains the inception of the machines and where they fit into the company’s product programme.

Hurco previously sold a range of driven tool lathe models designated TMM, but their performance was limited as they were not controlled by the proprietary Max5 control that has proved so popular on the company’s machining centres due to features such as concurrent programming and recovery restart.

The new lathe control system, an in-house development by Hurco’s software engineers, was first introduced on the XP-series of 2-axis lathes in early 2018. The all-digital control platform was delivered alongside improvements to the design of the machine including a smaller footprint, roller guideways in the linear axes, a larger spindle bore and enhanced rigid tapping. The mechanical design has proven to be solid, accurate and reliable.

A primary reason for developing the TM Mi XP range, in addition to adding the superior features of the Max5 control, was to ensure that driven tool milling is smooth and accurate. The machines include a servo-controlled C-axis and the capability to deploy driven tools at all turret positions, allowing milling and off-centre drilling to be performed in addition to normal turning operations.

Two machines are currently in the UK, a demonstration machine at Hurco and another on trial at a customer’s factory. The first machines available for sale will arrive late June 2020. They will be the new 8-inch chuck models which, compared with the former TMM lathes, offer higher spindle power at 22.6 kW, a spindle bore increased from 62 to 79 mm, a draw tube diameter of 64.5 mm, up from 52 mm, and faster rapids at 30 m/min rather than 24 m/min. Coolant capacity has also increased.

Additional features of the control are: Concurrent Programming, Check for Errors, Compute Estimated Run Time, Recovery Restart in NC and Conversational, Linear Broaching, and Spindle Harmonic Control. There are plans to add features such as Tool and Material library in later releases.

Prices of the new lathes are the same as those of their former TMM equivalents. Hurco believes they will particularly appeal to manufacturers programming small volumes and one-offs directly at the control. However, the additional power and faster rapids should also make the products more appealing to those planning longer production runs.

The TM Mi XP range is part of a larger project within Hurco that will see the addition of further driven tool lathe models over the coming years. The addition of Y-axis and sub-spindle versions is anticipated for mid-2021.