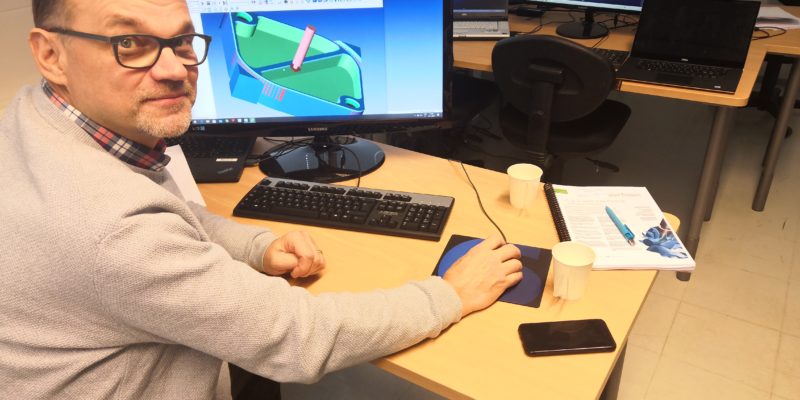 For many years, even when he was Prime Minister of Finland, Juha Sipila has relaxed through designing and milling a variety of items. Now he has taken his hobby to a higher level, with a new 4-axis CNC machine tool, and SURFCAM CAD/CAM software, from Hexagon’s global portfolio.

He machines aluminium, brass. plastic and wood, and was looking to upgrade his Roland milling machine and CNC router, along with the software to drive them.

Before entering politics, he was an industrialist, owning a number of manufacturing companies, which gave him his first taste of machining. And he quickly realised that physically making things with his hands helped him to relax and solve abstract business issues. So he turned to also making things at home, as a hobby.

Vesa Sirén, from SURFCAM’s distributor in Finland, Rensi Finland Oy, provided him with his first CNC machine for the garage at his home in Kempele, North Finland, in 2005. Now he is expanding his  hobby of designing and manufacturing lifestyle products, that machine is being replaced with a larger 1.5m x 300 mm rotary table 4-axis simultaneous machine. He’s also having a new 4-axis router at his second home, in Southern Finland, and has invested in the powerful and fast SURFCAM CAD/CAM system from Hexagon’s production software portfolio.

Juha Sipilä was elected to the Finnish Parliament in 2011, becoming Chairman of the Centre Party the following year, and Prime Minister in 2015 – a post he held until 2019. During his time in politics he found that his manual hobby also helped him solve political issues as well; and he made a number of items which he gave as gifts to German Chancellor Angela Merkel, French President Emmanuel Macron, and the Swedish and Estonian Prime Ministers.

SURFCAM is now an integral part of his production processes, using the SURFCAM Designer direct modelling system for design, and the CAM module for machining.

The software played an essential role in helping him show neighbours his idea for railings along a pier. While the Finnish Parliament sits, he lives at Sipoo, near Helsinki, in one of 20 houses that share a common pier for their boats. He says it was extremely simple to draw up his suggested design for the railings.

SURFCAM has revolutionised how he uses both CAD and CAM. Typically now, he creates a 3D model in SURFCAM Designer and exports it into SURFCAM Traditional for producing fast, accurate toolpaths. He is particularly impressed with its game-changing Waveform Roughing strategy for milling aluminium and brass. “My CNC machine tool has a spindle speed of 24,000 rpms, so Waveform means I can have light cutting with fast feed rates.”

Vesa Sirén says: “Mr Sipilä had been looking for a more flexible design and CAM system, so SURFCAM Traditional was ideal for him. And he knew from experience that we, as Finland’s distributor, have  provided SURFAM to more than 1,000 companies and can give full service, knowledge, support and training.”

He has already undergone initial training on SURFAM Designer and basic 2- and 3-axis machining, and will complete training on 4- and 5-axis toolpaths later in the year.

As Prime Minister he was not able to pursue his love of producing lifestyle products as much as he would have liked, but now his duties as an MP mean he has more time…and with his new machine tools and software, he is looking forward to creating many more.

Vesa Sirén continues: “SURFAM Designer gives him the flexibility to quickly and easily modify and edit his designs; and SURFCAM’s 5-axis module offers true simultaneous 4- and 5-axis machining with full tool motion visualisation and verification. Precise control is achieved over every aspect of multi-axis machining, ensuring safe tool motion for even the most challenging applications. The 4- and 5-axis system provides support for all standard tools with collision checking, gouge avoidance, and toolpath containment. This is perfect to give him the freedom to fully express himself in wood on his new 2.5m x 1.3m 4-axis machine.”

In the past Juha Sipilä has produced a variety of high end lifestyle items, including gavels, and engraved pieces for a meeting of his political party, along with sturdy aluminium parts for a wood gas powered car.

Vesa Sirén concludes: “The need for 100 per cent accuracy is relative, depending on what he’s making. A number of Mr Sipilä’s items are metal assemblies, so it’s vital that the components fit together perfectly. He knows that with SURFCAM, each component coming off the CNC  machine will be right first time, every time. His products will be even more beautiful now.”