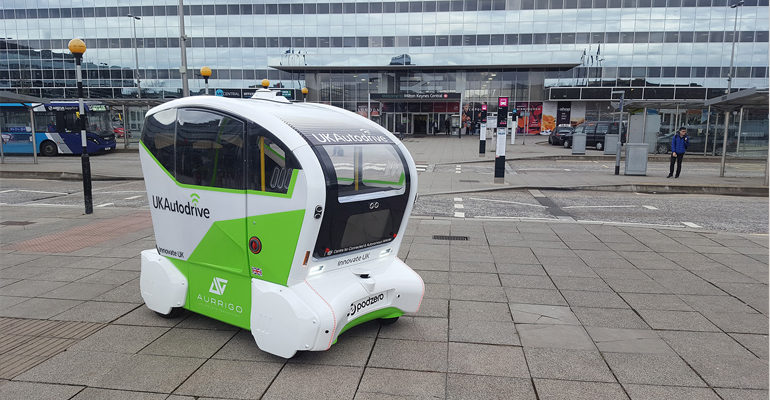 A Coventry-based autonomous vehicle specialist will press go on the official start of the UK Autodrive trials in Milton Keynes this week, with self-driving pods taking to the pavements and streets of the town over the next 12 months.

Milton Keynes Council (MKC) is working with Aurrigo, the autonomous vehicle division of RDM Group, to test out a new first/last mile transport solution for local people, shoppers and visitors to the town.

Up to 40 pods – capable of travelling up to 15 miles per hour and lasting up to 60 miles off one charge – will operate from Central Station to Campbell Park and Silbury Boulevard to Avebury Boulevard.

Brian Matthews, MKC’s Head of Transport Innovation, welcomed the significant milestone: “This month will see the demonstration of three forms of Connected and Autonomous transport in Milton Keynes. We will have self-driving cars, delivery robots and Pods.

“The demonstrations are designed to test and evaluate the technology for its suitability, not least around safety, so the trials will be closely managed. It’s very exciting as we could be on the cusp of what might be a revolution in transport with the potential to provide increased mobility for all.”

Aurrigo has invested heavily in the development of a control centre in the town centre and has recruited the first three people to support the trials as part of a final team that will be ten-strong.

This gives the company the presence on the ground it requires to safely and effectively oversee the testing before it goes live with passengers in the Summer.

“Initially, people will see just one or two pods at any time, as we build up the fleet over the coming months. These trials are the next step in proving that driverless pods are safe, reliable and can work on dedicated routes in and around Milton Keynes,” explained Dr Richard Fairchild, Director of Autonomous Mobility Programmes at Aurrigo.

“Over the course of the trial, each pod will travel thousands of miles and all the information and experiences we gather, will be channelled into providing the safest and most efficient first and last mile transport solution in the UK.”

He continued: “We’re excited about deploying in Milton Keynes which is a very future facing city and we hope that people will get behind what we are trying to achieve.”

UK Autodrive, which is funded by Innovate UK, is an ambitious three-year project that is trialling the use of connected and self-driving vehicles on the streets of Milton Keynes and Coventry.