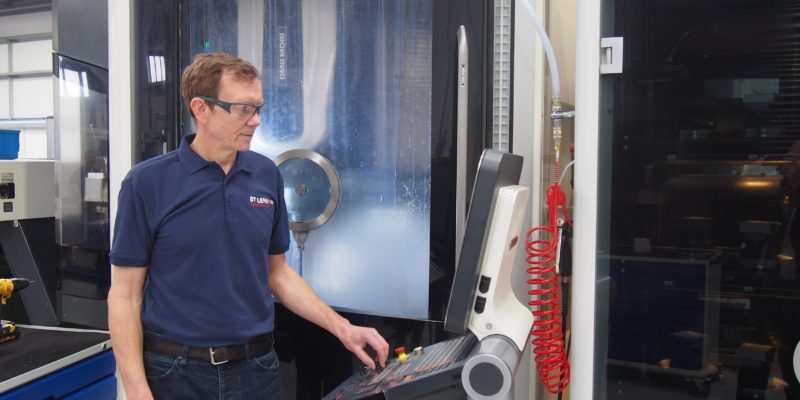 BT Lerson, operating from its brand new 15000 sq ft facility on the doorstep of Stansted Airport, is working in partnership with DMG MORI, benefiting from the capabilities of the machine tools themselves and the technical support, training and contacts the collaboration brings, to make a step change in its business.

70% of its work is in the aerospace and defence sectors, but also serves the oil and gas and pharmaceutical industries. Started in 1980, it made the move into CNC in the early 2000s and changed its business model to concentrate on higher value parts in 2010, achieving AS9100 status in 2014.

The company’s first 5-axis DMG MORI machine, a DMU 50 was purchased pre-owned. Collaborating with DMG MORI helped them get to grips with the 5-Axis technology. The machine was refurbished by DMG Mori, marking the beginning of a close partnership. This was soon followed by a DMU 40 Evo with Erowa automation in 2014, DMU 60 Evo linear with 3R automation in 2016 and two NLX 2500/700 in 2018 and 2019. Julian Bedford, Managing Director at BT Lerson says, “5-axis technology is more demanding, and it was a big learning curve for us, but we soon saw the benefits of the investments as cycle times were slashed, and product quality increased dramatically. We also recognised the need for automation, to enable us to get more from the machines, people and skills that we have.”

DMG MORI supplied turnkey automated systems to BT Lerson. “We were early adopters of automation and the cost was easily recovered within two years.  If we had not invested, we would have needed three conventional machines to produce the same output with all the implications of extra labour, much more floor space and more work in progress. Going forward, we now consider that automation is essential.” The company monitors its machine performance and the automated machines run at over 90% OEE.

The 3R system has 60 pallets and the Erowa system has up to 24 pallets. BT Lerson sets up a series of different jobs to match demand. It also sets up sister tooling where long machining times are called for and uses the DMG MORI tool life management to switch tools automatically, enabling the machines to run unmanned for most of the time.

The two DMG MORI NLX 2500/700s replaced previous machines and have a bar feeder and parts catcher to produce parts up to 80mm diameter. For bigger parts, the chuck can produce parts up to 366mm diameter. Julian Bedford says, “These are fantastic machines and have changed the way we do turn/mill. They are so robust and thermally consistent that there is very little deterioration in tolerance. We can now reliably run unmanned for 24 hours with tight tolerance parts. We have also invested in DMG MORI gear cutting software on the machines, often reducing the process from five operations to two.”

All the DMG MORI machines are covered by a five year service and preventative maintenance plan and the company is planning to extend it to other machinery in the factory. BT Lerson also used DMG MORI finance for the NLX machines. “The finance was very competitive and flexible with many favourable options such as, deferred payments and balloon payments”.

Formerly BTL Precision, BT Lerson acquired Lerson Fabrications, which is a preferred supplier to Stansted Airport and its supply chain and moved to its new location at the end of 2019. Julian Bedford, says, “The move to the new factory is several steps up in our working environment and has a big impact on customer confidence. Aerospace customers see that we have DMG MORI machine tools, properly monitored in a professional environment and are immediately reassured. They are trying to build long term relationships with good and competent companies as part of their supply chain and our aim is to expand towards more in depth and earlier involvement with these customers where, high quality and competitive pricing are the key considerations. Already we are up 30% on the previous year.”

BT Lerson is building on its relationship with Stansted Airport and bringing its fabrications business to AS9100 standards too. Julian Bedford is a governor at Harlow College, where DMG MORI has a presence. The college is currently involved in a project at the airport which is due to expand significantly. Julian is also involved in a digitalisation project at Cambridge University, so he is evaluating how this can be implemented at BT Lerson. Similarly, he finds that meeting other DMG MORI users is useful, sharing skills and building relationships for mutual benefit.

Julian Bedford concludes, “Working in partnership with DMG MORI has definitely led to new business and is enabling us to reinforce long term relationships with our customers. A strategy of collaboration and cooperation at all levels of the business combined with technical excellence from DMG MORI has transformed how we operate.”